You are here: Policing Slavery » Working with Partners and the Public » National Enforcement Powers Guide 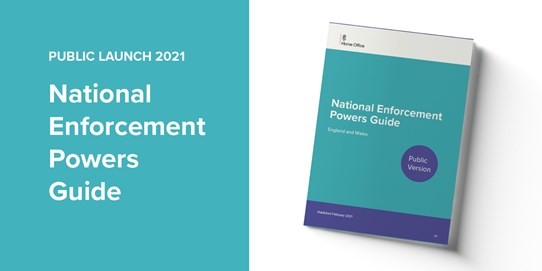 This, updated 28th July 2021, public version of the guide for England and Wales (accessed from the pdf link in red text above) is aimed at all professionals in law enforcement and associated organisations who may encounter victims and perpetrators of exploitation and modern slavery, along with other forms of serious and organised crime, in their day-to-day activities. It is suggested that this guide should be used as a reference document for agencies to assist in planning and working with partner agencies when considering who should be involved at the various stages of conducting activity, in order to respond to potential victims and offenders of exploitation, modern slavery and other crime types.

The purpose of this guide is to help facilitate a faster tactical multi-agency response and to use the appropriate legislation available to gain entry into commercial and residential premises, where intelligence has indicated that there could be a potential case of exploitation or modern slavery. Likewise this guide can be used to support agencies to understand and develop key processes when finding victims and offenders of exploitation, as well as wider serious and organised crime.

For Law Enforcement professionals a Full LE Version is available through your Police Force, Agency or from the Policing Slavery Group on Knowledge Hub.

The passing of the Modern Slavery Act 2015 marked a dramatic shift in national focus towards tackling modern slavery and exploitation. Consequently UK anti-slavery policy and funding facilitated increased operational responses among law enforcement partners across the UK. The 2017 research report ‘Collaborating for Freedom: Anti-Slavery Partnerships in the UK’ published by the Independent Anti-Slavery Commissioner (IASC) and the University of Nottingham’s ‘Rights Lab stated that: ‘different enforcement agencies [are] still working to their own agendas or calendars without this being joined up or thought out’ (survey response), along with ‘silo mentalities, a lack of sharing information and different areas having different resourcing structures to deal with this crime’ (survey response). Furthermore, a lack of coordination has led to ‘inefficiencies and duplication’ (survey response).

At the Eastern Region Anti-Slavery Partnership (ERASP) Conference in January 2020 it became evident that one reason for a lack of consistency and coordination is that there is a lack of understanding between agencies around their different roles and powers. Considering powers of entry alone, which are the main focus of this guide, there are currently over 900 separate powers of entry under primary and secondary legislation allocated to law enforcement agencies across the UK, over 175 of which require the issue of a search warrant. This is a staggering amount of legislation to know and understand, let alone apply practically day-to-day, creating the potential for missed opportunities by law enforcement agencies to work closer together, and to make the best use of these available powers in a more tactically coordinated manner.

The need to create the National Enforcement Powers Guide therefore came out of increased awareness of the gap in knowledge and understanding of different agency roles and responsibilities. Seeing the value in bringing this information together in one single document to support local stakeholders and agencies, the National Network Coordinators’ Forum (NNCF) and the Modern Slavery and Organised Immigration Crime Unit (MSOIC) have worked in collaboration to produce this guide.