You are here: Policing Slavery » Transforming our response » The Policing Response

The Modern Slavery Police Transformation Programme was established to support police forces in England and Wales in their delivery of a consistent and effective response to cases of modern slavery.
Follow @policingslavery

In 2017 the Modern Slavery Police Transformation Programme was established with the mission to: 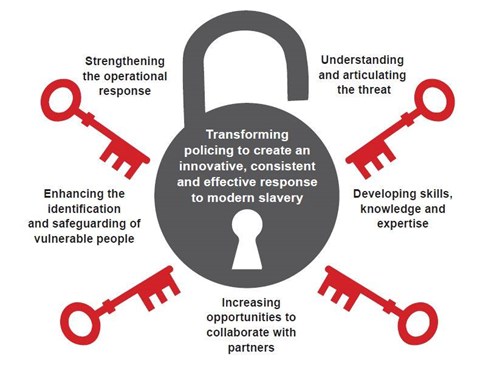 The national policing action plan for modern slavery was refreshed in January 2018 and was designed in line with HMICFRS recommendations and experiences of forces that have succeeded in tackling the issue. The modern slavery action plan runs to almost 50 activities and processes. As such it provides a ‘route map’ for forces in ensuring that good practice exists in governance and oversight, understanding the local threat, responding to victims and achieving high quality investigations is fully embedded within force operating procedures.

The activities are grouped into five main process areas. These relate to:

The Modern Slavery Police Transformation Unit (MSPTU), its team of Modern Slavery Regional Coordinators and Police and Crime Commissioners have worked with police forces to review progress in the implementation of action plan locally.

What has been achieved so far

"The number of police investigations connected to human trafficking and forced or compulsory labour has continued to grow. In February 2020, there were at least 1810 live operations; a 20% increase on a year earlier, and an almost 10 fold increase on the number of investigations reported when this programme began.

Analysing the data today we find that the largest area of growth in modern slavery investigations is in the exploitation of children and young people, which now accounts for just over a quarter of live operations. The business model of modern slavery involving young people, epitomised in so-called County Lines, is that it is based upon the victim being a perpetrator in crime. The result is an epidemic of child criminal exploitation but also criminality.

Meanwhile the number of investigations involving foreign nationals or vulnerable British adults has also continued to grow, albeit at a reduced rate. Indications are that the nationality profile of MHST victims may also be changing as we see a drop in the proportion of investigations involving potential victims from EU countries. However, the close links between organised immigration crime and slavery have become ever clearer in the light of the tragedy in Essex.

The Modern Slavery Police Transformation Unit has continued to support intelligence sharing regionally, nationally and across portfolios. Our team’s core role of identifying and promoting best practice in our response to victims and in the subsequent investigation of offences has also continued. Policing is now far better equipped to understand how to tackle this form of crime and much has already been achieved. Working with the College of Policing, we continue to focus on putting that knowledge into consistent investigative practice in every police force.

There is so much more that the unit has achieved. Now it is for all of us to remind ourselves of our own work in enabling colleagues within policing, wider law enforcement, partner agencies and NGO’s to safeguard victims, prevent others falling into slavery and to bring offenders to justice".

More victims protected - the number of NRM referrals received by police and other competent authorities continues to grow with greater public awareness and activity from partner agencies.

Specialist training delivered - Since 2017 more than 6,400 specialist modern slavery training days have been delivered by the programme to more than 4000 police officers and staff. All forces in England and Wales have participated.

Forces are also able to increasingly deliver the own activity with a network of more than 150 trainers having been equipped to support the delivery of general awareness training locally.

More than 800 analyst and research staff working for police and other law enforcement agencies nationwide have received specialist training, via a national conference and at 26 one-day CPD events, on the research techniques needed to support the prevention, intelligence and investigation work needed to tackle modern slavery.

Guidance documents have been published and provided to front line policing including: Initial Actions Aide Memoire, First Contact Booklet, Reception Centre Guide, three Comprehensive Investigations Guides for; Labour, Sexual and Criminal Exploitation and Guidance on obtaining Early Investigative Advice from the CPS. All these are available on the Policing Slavery and Human Trafficking Group on Knowledge Hub

Partner & practitioner networks engaged - A series of major partnership and practitioner events have been held attended by more than 1700 representatives of police, UK and overseas law enforcement, OPPCs, government agencies, crime registrars, local authorities, NGOs, community action groups and other partners – all focussing on working together to defeat modern slavery.