Identifying and then safeguarding and protecting victims are our priorities in responding to potential cases of modern slavery and human trafficking.
Follow @policingslavery

Deciding whether there are grounds to suspect a person may be a victim of exploitation under the Modern Slavery Act it is important to consider all the information available and not rely solely on what potential victims may say.  This is because potential victims may either not identify themselves as such or may have been schooled by their exploiters to provide prepared answers.

Consider the nature and type of services that a victim is expected to provide; whether that be provision of labour, sexual services, or in being expected to commit other crimes. Consider whether the victim is providing those services of their own free will, or whether the person may be acting as a result of physical threat or result having been deceived, tricked or coerced

Remember that there may be multiple victims, so initial enquiries with identified victims should establish whether there are further victims to consider, possibly at other locations.

If you believe someone is at immediate risk of being harmed or is in the process of being trafficked for the purposes of exploitation, call the police on 999.

If you suspect that people are being exploited or are in some way the victim of modern slavery, contact the Modern Slavery Helpline on 08000 121 700. 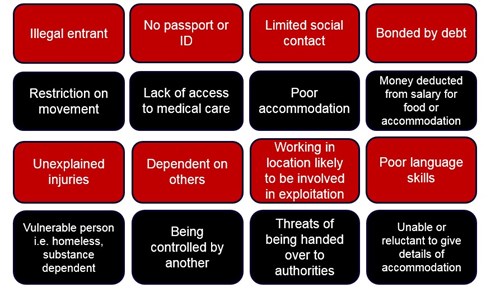 There is no single sign that determines whether an individual, or a group of people, is in the process of being exploited. Instead it’s been described as a general feeling that “things aren’t quite right”.

Physical Appearance - Victims may show signs of physical or psychological abuse, look malnourished or unkempt, anxious/ agitated or appear withdrawn. They may have few personal possessions and always wear the same clothes day in day out. What clothes they do wear may not be suitable for their work.

Finances – They will have little or no money and no control over their bank accounts.

Isolation - Victims may rarely be allowed to travel on their own, seem under the control or influence of others, rarely interact or appear unfamiliar with their neighbourhood or where they work.

Restricted freedom of movement - Victims may have little opportunity to move freely and may have had their travel and identification documents taken from them.

Reluctant to seek help - Victims may avoid eye contact, appear frightened or hesitant to talk to strangers and fear law enforcement agencies for many reasons, such as not knowing who to trust or where to get help, fear of deportation, fear of violence to them or their family.

Look out for locations where exploitation may be taking place:

Overcrowded and poor accommodation: Victims can be found living in poor housing conditions with multiple individuals living in one room. Sanitary, heating, lighting and washing facilities may be poor or non-existent. Windows may be boarded up or curtains always drawn. Accommodation may be at or near the location where the exploitation is taking place, sometimes also in temporary facilities like a caravan, container or agricultural buildings.

Comings and goings - and at unusual time of the day: Locations where exploitation is taking place or where victims may be living can be indicated by frequent comings and goings; or by the regular collection and drop off of groups of people often very early in the morning/and or very late at night.

Unregulated business premises and cash-only transactions: Businesses that are potentially exploiting workers may be indicated by premises that appear unregulated, unprofessional and are not well organised. Prices may be exceptionally low for the services offered. Businesses that only accept cash in hand payments for services, where there is no receipt issued and where payments are handled by a single person may also be potentially exploiting their workers.

The immediate consideration must be to ensure that a victim is either in or is moved to a place of safety and that any medical or welfare issues are attended to. They may need basic essentials such as accommodation, food, clothing and toiletries. Local authority safeguarding teams will be able to initially assist with this. Longer term support for victims is provided under the National Referral Mechanism (NRM). Victim Safeguarding Initial Actions for Police and Law Enforcement can be found on in the documents link to the right.

The Human Trafficking Foundation (HTF), in partnership with the Anti Trafficking and Labour Exploitation Unit (ATLEU) and the Modern Slavery Police Transformation Unit, produced and continues to develop an interactive national map of support services available for survivors in the UK. Access the Map here