Raising awareness within local communities, within businesses and amongst the general public

Members of the public, whether at their workplace, in their communities or as part of their everyday lives, have an important role in reporting concerns if they believe someone could be a victim of exploitation.

Raising awareness of this wider public responsibility is vital. That’s why recent work in this area by charities like Unseen; by faith groups including The Clewer Initiative and The Santa Marta Group; and by PCCs, law enforcement agencies and police forces is so welcome.

Partly as a result of this growing awareness, the number of live police investigations in the UK into modern slavery at any one time has increased from 188 in December 2016 to at least 1204 cases in March 2019.

The reality is that victims of modern slavery often feel unable to come forward to get help either due to language difficulties, because they are frightened or are prevented from getting in touch, because they feel uncomfortable speaking to authorities or because they may not even be aware they are being exploited.

The first thing to remember is that the public should ALWAYS dial 999 if they believe someone is in immediate danger, or is in the process of being trafficked for the purposes of exploitation.

More general concerns about individuals who are at risk of exploitation or about locations where it is believed exploitation could be taking place, should be reported to the Modern Slavery Helpline on 08000 121 700.

Unseen has also launched a Modern Slavery Helpline smart phone app which makes it easy to report concerns at the touch of a button. The Unseen app also provides further information about spotting the signs of modern slavery. Whether reported by phone call or via the app, the team at the Modern Slavery Helpline can then work with police and other agencies to ensure that calls are responded with the most appropriate support.

The Clewer Initiative has also launched a mobile phone app to help gather information and intelligence about the welfare of workers, initially at hand car washes. This further innovative smartphone app is a modern way to engage the public, whether members of faith groups or not, in thinking about and looking out for the signs of exploitation.

In the employment and business sector, the Gangmasters and Labour Abuse Authority (GLAA) and Unseen both run regular training and awareness raising activities targeted at commercial organisations. If the members of the public have concerns about labour exploitation they can call the GLAA helpline on 0800 432 0804. 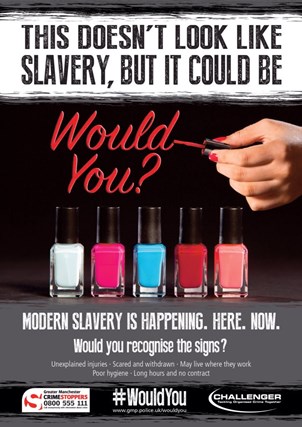 PCCs, police forces and regional anti-slavery partnerships also continue to conduct local awareness and engagement campaigns within their own communities, highlighting the risks of all forms of exploitation relating to modern slavery. 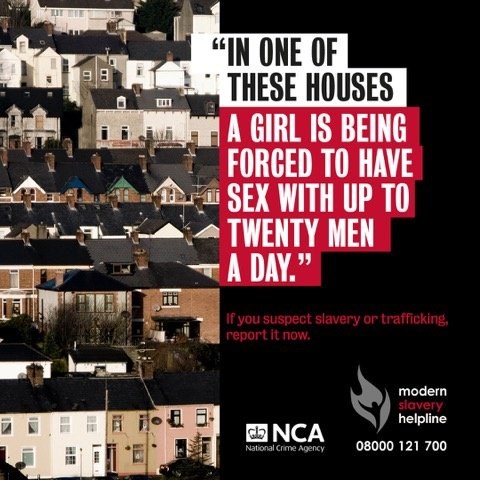 A further innovative campaign from the National Crime Agency has also helped to visualise the lives of victims who are exploited through different forms of modern slavery. The Invisible People exhibition travelled to locations across the UK in 2018 to raise awareness of modern slavery.  The NCA also produces public information materials to promote awareness in connection to operational activities the Agency is running.