You are here: Policing Slavery » Meeting the challenge » Promoting partnerships

Collaboration with local government, public sector partners, NGOs, regulatory agencies and the business community is needed to limit the potential for exploitation and trafficking.
Follow @policingslavery

When modern slavery and related crime comes to light, the role of the police in providing for the immediate protection of victims and in pursuing perpetrators is clear. However, a broader coordinated approach involving a range of partners is needed to offer continuing support to often vulnerable victims and to prevent exploitation from having a place in our communities. The ultimate goals of minimising and ideally eliminating the conditions in which modern slavery and human trafficking can grow needs a collective effort at a national, regional and local level.

In July 2018 more than 250 delegates attended the first national Policing Slavery Partnership Conference, held in Birmingham. The event showcased successes and shared challenges of how public sector agencies can work together, and with the police, to safeguard victims and target the perpetrators of modern slavery.

The event was introduced by Mark Burns-Wlliamson OBE who is the Association of Police and Crime Commissioners' lead for human trafficking and modern slavery, and the PCC for West Yorkshire.

The approaches and activities that multi-agency partnerships are involved in include:

Although several police forces, PCCs and regional organised crime units have already played a central role in bringing these partnerships together, it is not always the case that the police are best placed to lead them as they continue to mature.

Several partnership models were shared at the conference including the Challenger programme in Greater Manchester, the Welsh Anti-Slavery Partnership and the West Midlands Anti-Slavery Partnership. While a number of partnership are already well developed, colleagues from Hertfordshire Police talked about their experience in 2017 in taking a leadership role in establishing a new shared multi-agency approach when a more effective response to modern slavery was needed.

At the centre of the approach was to recognise that modern slavery, exploitation and human trafficking were “not just a police problem” given that the PCC, local authority, charities and other agencies were all aware of and experiencing related challenges. A conference was held to launch the initiative and for stakeholders to agree what work needed to done and how to organise its' delivery. A strategic oversight group was established with sub-teams including tactical ops, victim support and partnerships and training also being set up. In addition to leading tactical operation, the policing team also made a significant contribution to the development and delivery of training to more than 2,500 people – including council staff.

Key strategic aims of the activity was to inform the public that modern slavery exists, promote the approach being taken in Hertfordshire, to promote awareness of victim rights and to communicate directly with homeless and other vulnerable groups at risk of recruitment by those who might set out to exploit them.

The invaluable role that other partnerships undertake is widely recognised, particularly in leading on victim support while allowing the police to focus on the investigation and disruption of modern slavery, human trafficking and exploitation crime. 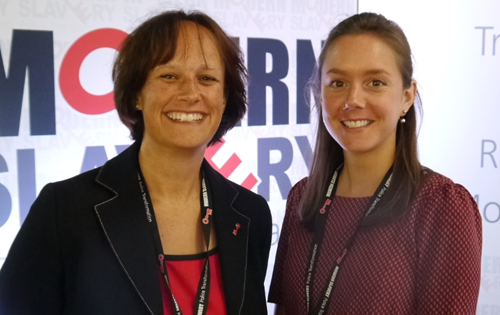